If you chance upon this blog, you may be curious as to what it is. Not much wonder perhaps; so am I! All I can say is that the idea to start a new blog focusing around family history began when I puzzled over how to sift and sort out all the material that's amassed over a time-span of forty plus years.

Everyone does genealogy nowadays. I'm all too aware of that. Who Do You Think You Are? has transformed the nation's family history hunting habits. But, forty plus years ago, in my memory, it was different. The Devon Record Office and Westcountry Studies Library, at that time both in the centre of Exeter next the library, and easily accessible via train and bus and walking, were the hub of activity for those who were out there looking for where they came from. And why they were here. Such as new mums in the zone of post natal blues and needing an outlet for their apparently dwindling mental faculties. That was me, at that time. Those wondrous study places at the heart of my then home city were a godsend,  a stroke of good luck. You'd go there. Pick out a parish record from the files and sit at the table and study the names, dates. Begin to put together a chart in your head and collate your family background in your notebook No technology. No smart phone apps. to help you. Not yet anyway, and though yes there were others in the record office and library obviously engaged looking for the past of their own familial quests, there were not masses of them. The WSL and R.O were often quiet and silent. A place for those who wanted to pursue a solitary journey.

Then there were the churches where, taking for granted that they would be open and unlocked, in the late sixties and very early seventies you could still drive to outlying villages (in my case, Devon), wander into the interior and occasionally find an old chest which still retained and stored the parish records. Amazing, eh? Broadwoodkelly, where the bulk of one main branch of my paternal family ancestors were rooted, was one of them. We'd open the said chest and, though admittedly some of the parish record book/s were by now creeping with a little mould and damp, you could thumb the centuries old pages and jot down all the relevant hand-written dates and names. No need for CD roms or access to digitised material for several years yet.

Thus my own paternal side genealogy began. Notebooks full of names and dates going back to late 1600s, mostly from Broadwoodkelly. Back, if I remember rightly in a direct line as far as Simon Sampson (from 'North Tawton') who married Mary Hall (of Broadwoodkelly) in circa 1708. But then I was stuck. I couldn't trace the line any further at that time. I think that may have been the far extent of the parish records. It was many years before I was able to retreat further with the dates and find names expanding again.

As it was I had far too many names and confusing dates of Sampsons in Broadwoodkelly for my then temporarily rather low-functioning brain to organise into a thriving family-tree. A couple of family members were brilliant in helping to collate the skeletal shape of the Sampson chart, an aunt already preoccupied with her own genealogical study provided supplementary documentation and a doting uncle all too readily offered to construct a 'proper' tree, which has stood the test of forty years time and still goes the rounds of the requisite family.

On the other maternal side of the family, the material also grew, but in a rather different way. No record offices, or other archival sites, but first-hand through my Grandmother Annie, who came to live with us for the last years of her life and loved to talk about her twelve siblings and relate anecdotes about each of them as she traced their life journeys in the dimming caverns of her mind. During these years, late sixties, I scribbled down as much as I could of the exclusive information she provided, though only returned to focus on it years later when my serious interest in the family past took off. Only then, years later, did I find out through online contact with another descendant of Grandma's extensive sibling offspring that one Thirza, one of my grandma's sisters (who she thought had died as a teenager) had actually lived for years and died at the age of 31 in the then mental institution in Exminster. Thirza's grave is there.

Thirza remained in the assylum until her death from TB on 2 June 1911 aged 31 years.She was buried in the assylum cemetery....It was always thought by later family members that she had died in her late teens/early twenties ,the time of her last admission to the assylum (See Devon Roots).


Here was one of the awful family skeletons-in-the-cupboard they always tell you about falling out before me. I wished I could talk to Grandma again. Tell her the terrible truth about her sister. But she was long gone. Perhaps it was best she never knew.

By then my family history hoard had increased exponentially and at least one chest of drawers was packed to the brim with the very stuff of ancestral research - photos, photo-albums, diaries, charts, autograph books of various family members, a panoply of life certificates (birth, death and their ilk) and a surfeit of as yet unidentified material and documents.


I'm sure if you're got this far you're likely to be some sort of family historian yourself (probably the one so-designated by your own family) so will be following the drift of this.

So, why a blog, rather than a stand-alone web-site which with genealogy seems to make more sense? I know there are some wondrous websites out there, which present a multiplicity of family researchers and their material in 'proper' genealogical ways', ie they are highly organised and collated, written up using up to date applications or online websites specifically created to document family history.

And, believe me, I've tried. To begin with, I began to keep an online family-history with Tribal Pages. I still make sure as much as of the factual material goes there, together with some photos and notes etc. It is an excellent online site.

But writing family history doesn't seem to work in the conventional ways for me. In my imagination I sit and write a factual, yet inspirational description and life-account for each new member of the family I stumble upon in the course of research. Concurrently, I draw up informative charts, write descriptions about the places the people came from. But, as yet, at least until recently, none of these have come together in any way, shape, or form. I am not sufficiently systematic in my approach; that way is not for me. As a wannabe poet/writer, all kinds of clashing creative inclinations get in the way of linearity and also, other work I've been involved in regarding another field of research, ie women writers who came from Devon, frequently feeds into and with the various threads of our family's history in Devon.

So last year, when I began to start to put together the various pieces of writing I'd collated over many years relating to our family history, I decided to make use of all of the above. I'd let those insistent voices from the past speak aloud in my mind; I'd let the poems about ancestors live and write them onto the empty page; I'd let the drifts of words roam over the lost landscapes of my mostly Devon ancestral past. Perhaps the only way to describe this family history writing approach is experimentally poetic, but I like to tell myself that there is an overarching format involved as well. A kind of lynch-pin. I started to put together various bits of writing into some organisational plan, using the four main branches of grandparents as the initial spring-boards, then the eight great-grandparents as marking points to more extensive collections of pieces, poems, layered writing, or/and life-stories which delved more deeply into the ancestral twigs of that great grandparent.

My plan was eventually to collate everything into a self-published family-book, which I'd then circulate to interested people in my family. But time runs on, as does one's age, and with various other competing life commitments, the plan may never come to fruition. That's when I decided to think of beginning another blog. I didn't and don't know that it will work. It will be hard to keep the shape of the thing. It will be hard to publish posts in chronological, or other order. It will be hard to link and connect from one post to another. The site will probably become tediously slow to load with all the links and pds I will probably upload. But then that is equally the case for genealogical research itself. One can become immersed in a labyrinthine paper trail, trawling through the names and just waiting. Waiting for the lost link of name, place and date to reveal itself. You have to learn to have patience, not get distracted and wander into another list or chart or archive on a goose-chase after yet another elusive family member.

Lastly, I haven't got a clue whether other family history writers use blogs. But, I concluded, it might just work. It will not be easy to maintain the coherence of an 'ordinary' website as the posts will likely appear at various times and be added to at a later stage, but I hope that by manipulating the dates of publishing to be able to retain at least a semblance of order.

The writings that get posted here may last the test of time, in one way or other; unlike papers, unlike documents, photos, scraps of paper shut in the family history chest of drawers, which can easily be thrown out, burnt or disposed of, my intention is that what ends up on Finding Sites the Older Ways will stay put in some online archive, for posterity. No, unless you are linked to the inter connective branches of this family you will likely swiftly turn somewhere else for your daily blog-read. But, if you come upon it and are one of them, you might find a post and learn something about your family's past. You might decide to pursue an intriguing thread.

With family history of course there is no beginning. And certainly no end. We just have to dip in, find what we can and reformulate our own discoveries so they can unfold into a new genealogical multiverse.

You might find a way for someone to live again. To speak again. I want to find a way to allow individuals from our family ancestry who did not have a chance to leave any kind of imprint in their own physical world to live their unfulfilled potential in the modern C21 online world. The women especially, who inevitably disappear in every way shape and form from conventional genealogical research and for a multitude of reasons take hours and hours more time to identify. Or, we might bring to the light those who have been shut up in some terrible lost secreted family closet, like Thirza my beautiful great aunt, squirrelled away from her family in an institution, unable to voice her pain and loneliness. 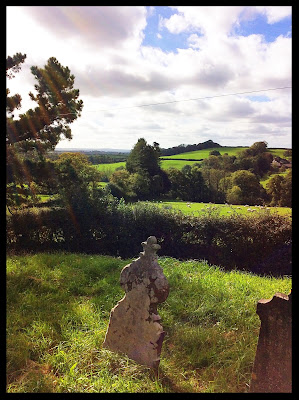 Abbott Family & Branches down in Dean Prior

Also see Scrapblog: a Writer from the South-West and Writing Women on the Devon Land